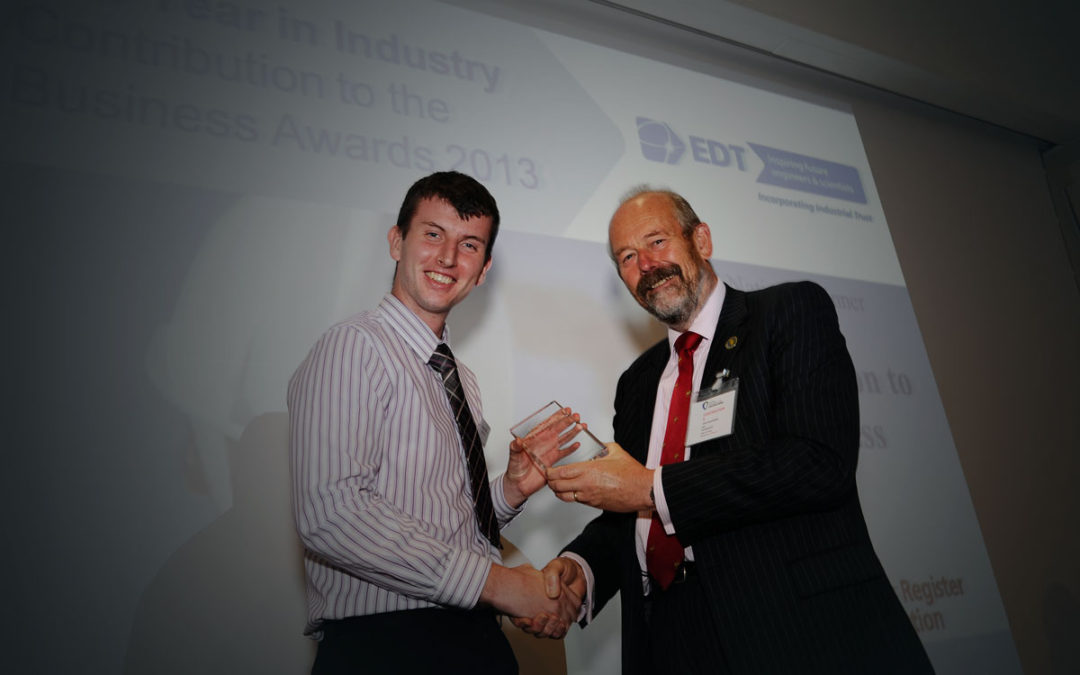 Ciaràn McEvoy, who spent last year on a work placement with Ingimex, has won the top award at the national awards for “The Year in Industry” programme which is run by charity EDT. His success follows that of Adrian Schmieder another Ingimex ‘Year in Industry’ student who took the “Innovation” award last year.

National Director of The Year in Industry Chris Ward says, “Considering that around 300 companies take students each year under ‘The Year in Industry’ programme the success of students from Ingimex in the national finals for two consecutive years is remarkable. It is a tribute to the way Ingimex looks after its students and gives them challenging projects which can make a substantial difference to the business. Many major organisations including Shell, Rolls-Royce, Eon, L’Oreal, Network Rail and AstraZeneca take students through ‘The Year in Industry’ and Ingimex ranks in that class in providing their students with the opportunity to gain real business skills and experience.”

Ciarán, who took the working gap year before going on to study Mechanical Engineering at Newcastle University, won the top ranking “Contribution to the Business Award” at The Year in Industry Awards which took place at the Royal Academy of Engineering on Thursday 19th September. The prize is sponsored by the Institute for Engineering and Technology and is awarded by a panel of judges from major UK companies.

“Ingimex is a strong advocate of ‘The Year in Industry’ as the programme provides genuine two way benefits for the company and the student. As a company we get to work with some exceptional raw talent that is looking for experience before going on to university. This means that we can give them projects which are beyond the day to day, and which can help our engineering team make step changes in the way we do things. The student has the benefit of developing those skills that they don’t teach at school or university; how to work in teams, how to persuade and influence people, how to manage projects, how to manage time and how to present ideas. We always like to keep in touch with our students once they have gone to university and they will often come back to us for full or part time work.

Ciarán did exceptionally well to achieve such a successful outcome while working with experienced and mature engineers. His tact and good humour enabled him to see the project through from design to final delivery of the system and a successful implementation involving all the panel assembly operators”.

Ciarán’s duties at Ingimex included the design and implementation of a bespoke operator-friendly tool shelf; the analysis of a significant work process, identification of a major synchronisation problem and the design and delivery of a cost saving and efficient solution. Ciarán is enthusiastic about the year he has spent working in industry;

“Finally, I was able to put the maths that I had learnt at school into practice, forcing me to remember and therefore embed things I thought I’d long forgotten. I found my interpersonal skills stretched, for I had to befriend all the different departments to gain cooperation and trust, to follow my project through to the end. As I mention in my presentation, the transition between school and the working life was the coming to reality of no longer being spoon fed the question and answer and having to go out my way to find both. Nearly all the unemployed University graduates I’ve spoken to have the one common problem: lack of experience, so would I recommend the Year In industry? In a word: definitely!”

The system Ciarán developed virtually automated the transition of the side panel assembly onto the next stage. The overall time taken at this step was greatly reduced, as he entirely removed a bottleneck and subsequent downtime. The process itself was simplified and made more manageable for the operators and the transition is now a smooth, single movement, assisted by a roller table assembly and lifting mechanism that Ciarán designed and introduced. The net result of this work was a reduction by a third of a critical stage in building the Luton van.

For Ciarán his chances to win awards will not stop here because as winner of the Year in Industry Award he will automatically go forward to participate in the Engineering Employers Federation National Manufacturing Student of the Year Award.